For my first Kickstarter, some backers requested visual references for the characters to help their voting choices, so I put together this little “cheat sheet.” Since some current readers have been asking for a similar reference, I decided to post it up here too. (You can also find out lots more good information about our characters on The Young Protectors’ TV Tropes page — just bear in mind, I don’t actually edit or contribute to that page, so it’s not 100% accurate/canon.) Please let me know if you have any questions! 🙂

Here was our first group shot with the entire Young Protectors team:

That image gives enough to know who’s who, but not much detail is there, though. Here’s another group shot with some more detail, although sadly it doesn’t include Commander. 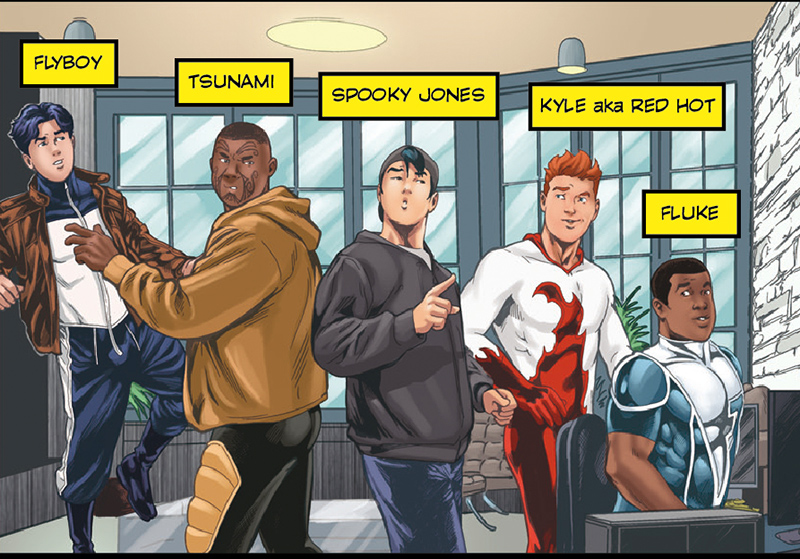 Kyle (“Red Hot”) is our hero. He’s good-hearted and sincere and has a fighting spirit. A young, gay guy still in the closet, we’re introduced to him just as he finally summons the courage to enter a gay bar for the very first time. In terms of his powers, we’ve seen him create, manipulate and absorb fire. He also seems to have a mean left-hook. This handsome devil here is The Annihilator (Duncan Wells), “the most dangerous supervillain in the world.” Readers continue to speculate what his “real intentions” are, but in terms of his interactions with Kyle, it began with him asking for a kiss. He’s suave and very confident. In terms of powers, we’ve seen him use super-speed, super-strength, super-reflexes, some form of immunity to damage (at least fire) and super-healing. This is Commander (Amanda), the leader of The Young Protectors team. Strong, confident, dedicated and unflappable, as far as the boys are concerned, her word is final. We’ve seen her mention telepathic powers, but the rest of her abilities still remain a mystery. This is Fluke (Paul), the other one of Kyle’s two best friends. Somewhat of a prankster, he enjoys teasing the much more buttoned-down Tsunami. But he definitely takes his role as a hero seriously as he is quite willing to sacrifice himself to save other people. The most physically fit member of the team, he also seems to have some kind of luck-based powers where he’s able to translate personal bad luck into good fortune, at least for others. This is Spooky Jones (Spooky Jones), one of Kyle’s two best friends. At twenty years old he is, along with Commander and Tsunami, one of three members of the team who are no longer teenagers. Full of good humor and playful wit, Spooky also appears to be one of the most powerful members of The Young Protectors, able to summon demons and create massive creatures out of thin air. He is also the only one who dares to tease Commander which quite probably makes him the bravest member of the team as well. Flyboy (Mitch), the guy on the right, is the youngest member of The Young Protectors by almost two years, having just recently turned fifteen. Still finding his place in team, he often struggles with being “the kid” of the group. The only power we’ve seen him use up to now is flight, but there is something about the way he carries himself that suggests he’d also be good in a fight. Tsunami, the guy on the left, is the most serious and cautious of all The Young Protectors, which causes some friction between him and the more light-hearted team members, Fluke and Spooky. He also is quick to assume a big brother role for Flyboy. His powers are water-based and so far, we have not seen their full extent. The Annihilator has identified The Platinum Priestess as a friend. With a wicked sense of humor, she is someone who is clearly used to getting her way and has little patience for the pleasantries. We’ve seen her open a magical portal to a faraway country, create a dapper suit out of thin air and perform some sort of diagnostic magic, but really we have no idea what she is capable of. And that’s exactly how she’d want it. Killer is the self-proclaimed “hero” on the left. He likes knives, cutting people and super-villains who aren’t afraid to cry—ideally while he’s beating on them. It would be unwise to underestimate him, though. He is rather dangerous with that sword. Hunter is the self-proclaimed “hero” on the right and is the Tweedledum to Killer’s Tweedledee. He has cyber-enhanced abilities and advanced weaponry and isn’t afraid to blow a flower-market all to hell if it means getting his man. He also isn’t even a quarter as funny as he thinks he is. Seeing as he wears a rocket launcher on his shoulder, probably best not to underestimate him either.